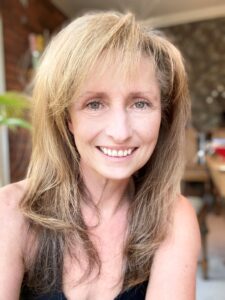 Training
Sue has been trained and examined as a student in Ballet, Jazz, Tap, and Acro (CDTA, DMA, ADAPT, PMT) under the direction of Brian and Faye Foley (ADAPT), Audrey Meredith (CDTA), Paula Morgan (PMT), Deborah Lundmark (RAD) and achieved certificates in all disciplines at Advanced Levels.

Community Involvement
Sue is involved with the Huntsville Festival of the Arts, Rotary Club, BIA Festivals, Agricultural Society, Community Living, Retirement Community, Nursing Homes, Almaguin and Trillium Lakeland School Boards, Skating Club, Muskoka Montessori Schools and various local Theatre Groups. Sue has been recognized for being a role-model to young women in her community as well as her many years of community contribution. Sue was the recipient of the YWCA “Entrepreneur Award” for Muskoka Woman in Business in 2007 and was honoured with an award for outstanding contribution in “Arts and Culture” by the Town of Huntsville at their 2010 Olympic Torch Community Achievement Awards. Both of these awards represent a strong allegiance to the art of dance and a passionate commitment to the youth in her community. Sue was featured (April 2016) in a Muskoka Mosaic article as a person of interest in Muskoka and most recently selected as a Judge for Huntsville’s Got Talent (2018-present).

Student Success
Sue has had students accepted into prestigious ballet schools, such as The National Ballet School of Canada, Young Children Dance Theatre and Quinte Ballet School. Many of Sue’s students have won numerous awards, scholarships, and dance titles, as well as performed and competed in Spain, Las Vegas, New York City, Pennsylvania, Myrtle Beach and Walt Disney World, Florida. Many of her former students have successful careers in the entertainment industry, performing and choreographing professionally for Canadian Companies, International Cruise Ships and Professional Stage Productions. Some adjudicate Internationally, teach and/or own their own studios, others work in the industry as Producers, Choreographers, Casting agents and Directors for Commercial, Film and Theatre.